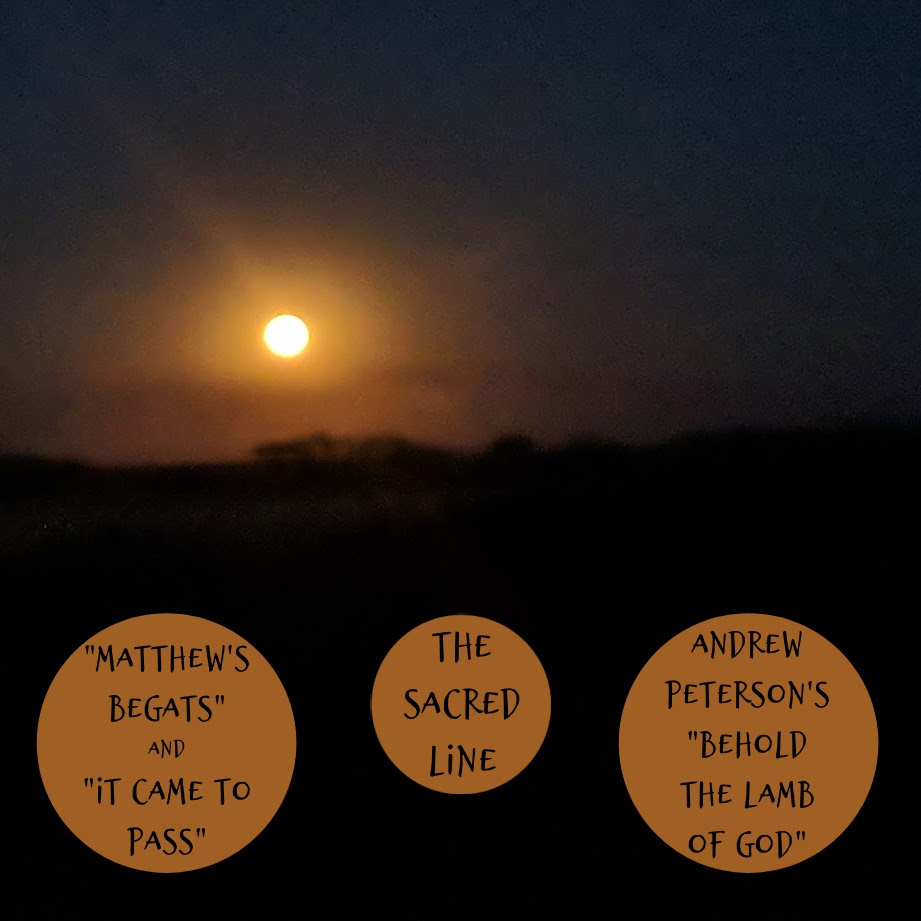 The Bible is a book of prophecy. Many predictions from the Old Testament come true in the New. Others will come true sometime in the future. Andrew Peterson talks about these prophecies in two songs.

Anyone who starts to read the Bible from the beginning of the New Testament might be surprised that the first chapter contains a long list of people. I will admit that until you know the rest of the story, all of the names can be daunting because many are hard to pronounce. But these generations tell the story of a faithful God who purposefully planned his Son’s arrival.

In Luke 2, there is another genealogy list. At first, they seem to be contradictory. Upon looking closer, one list has to do with Jesus’ mother, and one has to do with Jesus’ earthly father. What is fascinating to see is the fact that the last half of both lists are identical. God said that his son would come from the line of the David. And that was doubly true – both Mary and Joseph were from the house and lineage of David.

Yes, the names are long. But God starts the story of salvation through their lives. Maybe listening to this happy song will help.

Abraham had Isaac
Isaac, he had Jacob
Jacob, he had Judah and his kin
Then Perez and Zerah
Came from Judah’s woman, Tamar
Perez, he brought Hezron up
And then came

Aram, then Amminadab
Then Nahshon, who was then the dad of Salmon
Who with Rahab fathered Boaz
Ruth, she married Boaz who had Obed
Who had Jesse
Jesse, he had David who we know as king

David, he had Solomon by dead Uriah’s wife
Solomon, well you all know him
He had good old Rehoboam
Followed by Abijah who had Asa
Asa had Jehoshaphat had Joram had Uzziah
Who had Jotham then Ahaz then Hezekiah

Then he had Shealtiel, who begat Zerubbabel
Who had Abiud who had Eliakim
Eliakim had Azor who had Zadok who had Akim
Akim was the father of Eliud then
He had Eleazar who had Matthan who had Jacob
Now, listen very closely
I don’t want to sing this twice
Jacob was the father of Joseph
The husband of Mary
The mother of Christ

Prophecy: It Came to Pass

Did you know that many prophecies came true through the birth of Jesus Christ? These were found in many passages throughout the Old Testament. God wrote the story and made it all come true.

“It Came To Pass”

It came to pass back in those days that Caesar, he decreed
A census would be taken of the Roman world, you see
So everyone packed up and headed back to their home towns
And this couple up from Galilee to Bethlehem was bound

So it came to pass this man named Joe was with his fiance
Back when her pregnancy began to show he planned to go away
But it came to pass that in a dream an angel of the Lord
Said, “Joseph, don’t you be afraid to marry Mary for
The little baby in her womb it is the Holy Spirit’s work
You may have read the prophet said a virgin would give birth

Yes, it came to pass that Joseph was the noblest of men
With a woman on a donkey on their way to Bethlehem