Book: Every Star in the Sky

She is willing to testify against her trafficker. If she can stay alive that long. 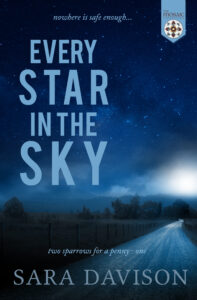 How many times has Detective Cole Blacksky said that to her since helping her escape the life she’d been forced into eight years earlier?

Starr desperately wants to believe him, but she knows Brady Erickson, her former captor, too well. Although Cole has promised her protective custody on his family’s remote ranch, no place on earth is safe enough. Brady will stop at nothing to permanently silence her before she ever reaches the witness stand.

And he is powerful enough to do it.

If Starr wants to help Brady’s other victims, she has no choice but to put herself in God’s hands. And Cole’s. But the longer she and Cole stay hidden, the more her life is at risk. 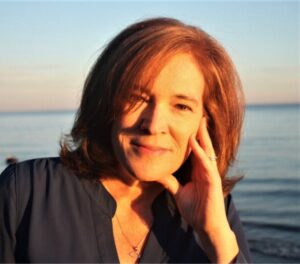 Sara Davison is the author of four romantic suspense series—The Seven Trilogy, The Night Guardians, The Rose Tattoo Trilogy, and Two Sparrows for a Penny, as well as the standalone, The Watcher. A finalist for more than a dozen national writing awards, she is a Word, Cascade, and Carol Award winner. She currently resides in Ontario with her husband Michael and their three mostly grown kids. Like every good Canadian, she loves coffee, hockey, poutine, and apologizing for no particular reason. Get to know Sara better at www.saradavison.org and @sarajdavison.

A few years ago, I attended a women’s conference in the Canadian capital city of Ottawa. The theme of the conference was human trafficking, which had always seemed to me something that happened in other countries of the world. The speaker informed us that, in fact, sex trafficking is very much an issue in Canada. In fact, she went on to say that if we were staying in a hotel that night, she could pretty much guarantee that somewhere in the building a young girl would be trafficked against her will while we slept peacefully in our beds.

That fact—and the way my subsequent research has borne up that truth—shocked, horrified, and deeply impacted me. And so, Every Star in the Sky was born. This romantic suspense novel puts a face and name and story to the scourge of human trafficking. While the fictional tale of one woman’s experiences, it represents the reality of countless women and shows the devastating toll this evil takes, not only on those in captivity, but on those who love them and desire to see them restored to freedom and eventually physical, mental, and emotional healing.

Every Star in the Sky is a love story. Not only between a woman rescued from trafficking and the man who risked everything to save her, but between God and every human being created in his image victimized by this unspeakable practice. The theme of this series, which I hope and pray comes across clearly to every reader, is that we are never alone. God sees what we are going through. He never leaves or forsakes us. He knows the name of every star in the sky, and he knows us deeply and intimately.

As the main character in the story reflects: “And if you know every star by name, you must know every one of us by name.” When no one around her, not even friends like Ruby, knew her real name, she had clung to the truth that God knew it, that it was engraved on the palm of his hand. Without that knowledge, she would have been afraid her name might be lost, since she was so determined not to let her true one slip out to Brady that even in her own mind she had become Starr. But God had kept her name in trust for her until Cole freed her, and now God had given it to her again. She hadn’t planned to tell it to Cole tonight, but something had nudged her to. Had assured her it was safe. That he was safe.

While the problem of human trafficking may seem overwhelming, prayer is our most powerful weapon against the forces of darkness. Pray for all those held in captivity, that they would experience God’s love and presence with them, that they would find freedom, and that all who participate in this evil would one day be brought to justice.

For Him and My Family, April 13

Because I said so — and other adventures in Parenting, April 19 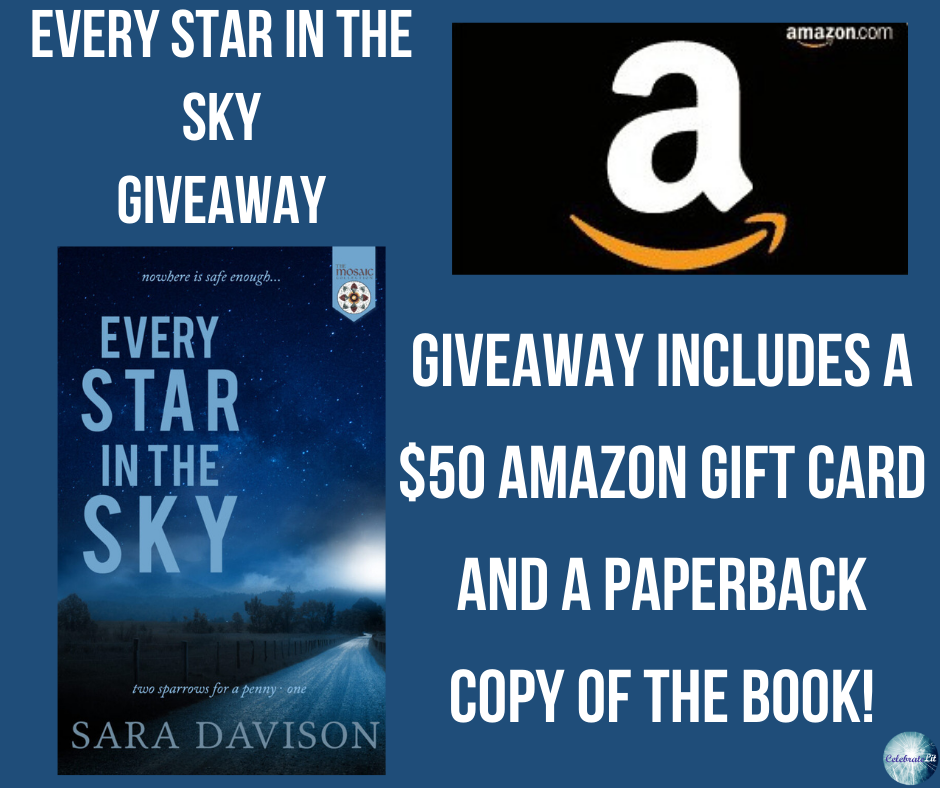 To celebrate her tour, Sara is giving away the grand prize package of a $50 Amazon gift card and a paperback copy of the book!!

10 thought on “Every Star in the Sky by Sara Davison”