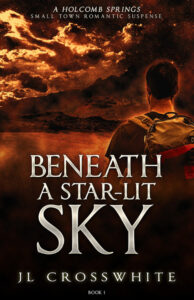 Book: Beneath A Star-Lit Sky

Who knew those simple goals could unearth life-threatening danger?

Holcomb Springs has a wild past, and the wilderness outside its borders hides a treacherous present.

Teacher Ella Sommer is ready to forget about her broken engagement and escape from running into her ex. An overnight hiking trip on the Pacific Crest Trail offers what she needs to clear her head and breathe out under the stars.

Ex-military Reese Vega left Holcomb Springs with a bad boy rep, but has returned wiser, longing for a fresh start in his hometown. His hiking tour business offers that opportunity, especially when he can get into the great outdoors and let his past evaporate into the mountain air.

When Reese and Ella are thrown together on the overnighter, what starts as a simple trek ends up being filled with danger when they stumble across something they weren’t supposed to see.

Can they put aside their history and use their wits to get out of this situation?

Or will it be too late?

You’ll love Beneath a Star-Lit Sky because while the wilderness can’t be tamed, the human heart can.

JL’s favorite thing is discovering how much there is to love about America the Beautiful and the great outdoors. She’s a mom to two, navigating the young adult years while battling her daughter’s juvenile rheumatoid arthritis, exploring the delights of her son’s autism, and keeping gluten free. A California native who’s spent significant time in the Midwest, she’s thrilled to be back in the Golden State. Follow her on social media to see all her adventures and how she gets inspired for her books! 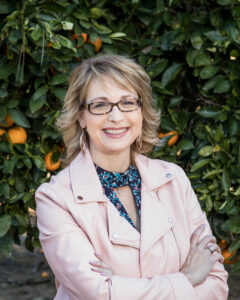 What does writing a book have in common with…

I’ve got a new series with the first book releasing this month. The series is called Holcomb Springs Small Town Romantic Suspense, and the first book is Beneath a Star-Lit Sky. I like how this series and this book show how long the creative process can end up being for me.

Before when I’ve talked about where I get my book ideas, I mention that I call it the compost pile. Any of you gardeners know about the magic of compost. You take a bunch of unrelated kitchen scraps—coffee grounds, carrot tops, egg shells, lettuce that went bad, rotten oranges—and throw them in your compost pile. With the magic of decomposition, in about a year you have something wonderful for your plants.

The creative process is a lot like that for me. I get bits and pieces of ideas from all over the place—things I’ve experienced, places I’ve visited, a news story that stuck with me—and I toss them in my mental compost pile. When something has come together enough to actually be a story idea, it gets its own file.

The germination of Beneath a Star-Lit Sky began at least ten years ago. I remember being on a long drive and talking to my dad on the phone and somehow getting on the topic of criminals in the wilderness, particularly the Sidney Poitier movie, Shoot to Kill. A lot of things can go wrong in the wilderness, and having a bad guy after you just makes it worse.

As I was writing and finishing up the previous series, In the Shadow, I had been wanting to write a series set in a small town. I liked the idea of all the characters continuing to run into each other and being a part of one another’s lives, for good or for ill.

Since I grew up at the base of these mountains and spent a lot of time up there, I wondered if I might figure out how to create a small town in the mountains. There are some up there, but I like creating my own so I can take liberty with things and not feel like I’m insulting any real town.

There was an old gold mining town—Belleville—that used to exist in an area called Holcomb Valley. I imagined what would have happened if that boomtown had continued on to become a resort town similar to Big Bear or Lake Arrowhead. I liked the idea of having a small town on the edge of the wilderness with all of the problems and possibilities it can bring. And it was within driving distance of Laguna Vista, so all of our old friends could come up and visit.

So the compost pile came together to truly cause my story idea to flourish and blossom into a full-fledged book! Toss in a few previous characters, and I had a ton of fun thinking about all the possibilities while keeping in touch with old characters who have become like friends. I hope you enjoy what’s to come. It’s going to be an adventure!

For Him and My Family, April 7

Because I said so — and other adventures in Parenting, April 17

To celebrate her tour, J.L. is giving away the grand prize package of a $50 Amazon gift card and a signed copy of the book!! 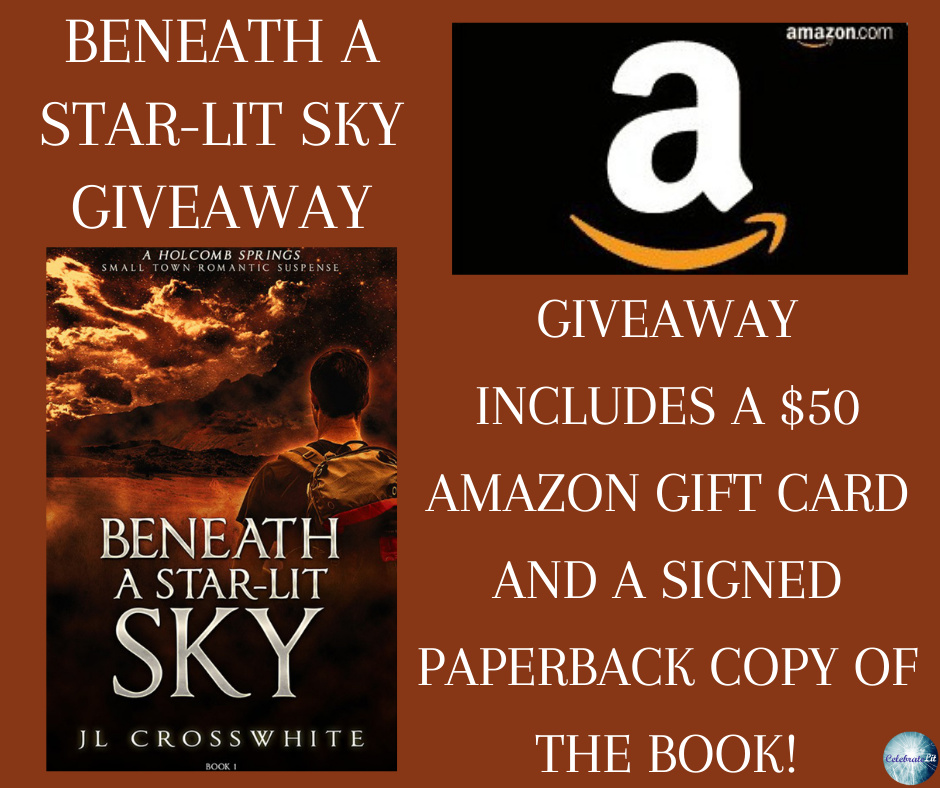 6 thought on “Beneath a Star-lit Sky by JL Crosswhite”