Bright Star Ranch led him to her–but will he stay? 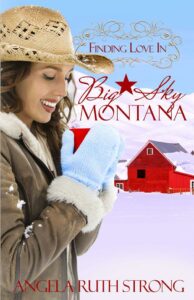 Josh Lake is forced to head home for the holidays after he’s suspended from his job in the city, but running into Paisley Sheridan could be exactly what he needed. Not only does she board him at her ranch in exchange for his advertising expertise, but spending the Christmas season with her in Big Sky, Montana, brings more joy than he’s felt in a long while. Is he willing to give up the lavish lifestyle he’s worked for in exchange for the gift of love?

The last thing Paisley wants for Christmas is to spend time with Josh Lake—the guy who broke her heart in high school—but until her bank loan goes through, she has to take all the free help she can get. Unfortunately, Josh seems to want back in her life again, and the town’s quirky coffee shop owners don’t help by hanging mistletoe at every opportunity. Will Paisley succeed in driving him away, or will she find the healing needed to have hope for a future together? 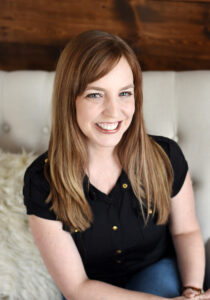 Angela Ruth Strong sold her first Christian romance novel in 2009 then quit writing romance when her husband left her. Twelve years later, God has shown her the true meaning of love, and there’s nothing else she’d rather write about. Her books have since earned TOP PICK in Romantic Times, won the Cascade Award, and been Amazon best-sellers. Her book Finding Love in Big Sky filmed on location in Montana and will air in spring of 2022. She also writes non-fiction for SpiritLed Woman. To help aspiring authors, she started IDAhope Writers where she lives in Idaho, and she teaches as an expert online at WRITE THAT BOOK.

Having my book made into a movie is a dream come true, and getting to be an extra on the set in Montana blew away all my expectations. There’s nothing like walking into a world you created and seeing your imaginary friends come to life.

I knew what was going on before anyone told me. I pointed around the set as I narrated: “They are going to hang that star on the barn. The horses are named Butch and Sundance. And that big red truck is going to break down because I WANT it to break down.”

I got it all right except for one thing. “Actually, Angela, the truck really did break down.” Oops.

Not only was I in on the inside jokes, but I kind of made them up. For example, during the “almost kissing” scene, Josh’s brother walks into the kitchen to look for ice cream. The actors got a good laugh afterwards whenever they were practicing the kissing scene because the actress would turn away with an “I’m going out for ice cream.”

I was only on location for one day, but it was the best day. I saw them film both kisses, the mentor scene, and we were extras in the cowboy ball. (I’m the one in the blue dress who signs up for the silent auction.)

However, my husband Jim was really bummed we couldn’t be there for the scene in the auto repair shop. He took his own coveralls just in case he could be an extra mechanic. We joked with the actress about it, and when we watched the final cut, we were surprised to see her call back into the shop to a “Jim.” I messaged her to ask if she did that on purpose, and she said she did. Such a sweet tribute.

On our last day, we ate breakfast at the Western Café (another film location) with the director, and we visited the jewelry shop where my hero had a necklace made for the heroine with the logo of her ranch on it. Jim gave me the exact same necklace for Christmas.

Everyone was so fun and nice, and even if I someday get to have another book made into a movie, I don’t think it could top this experience. I really hope you enjoy both the novel and the film. And may the message of how “you are a treasure” carry you forward toward your own dreams.

For Him and My Family, April 30

Locks, Hooks and Books, May 2

Because I said so — and other adventures in Parenting, May 4

Back Porch Reads, May 5

Truth and Grace Homeschool Academy, May 6

Happily Managing a Household of Boys, May 7

Blossoms and Blessings, May 9

A Baker’s Perspective, May 9

To celebrate her tour, Angela is giving away the grand prize package of a movie package with a $25 gift certificate to the movies, popcorn, popcorn bowl, and an autographed copy of Finding Love in Big Sky, including author notes in the margins!!

“We can learn that God has a plan for to restore to your life. He knows the how, the when, and the where, exactly like he knew about Jesus’s birth. And He wants to reveal it to you. But if you don’t seek God’s direction, you could easily miss it.”

Paisley Sheridan knows she wants to be a rancher but getting there is harder than she expected. Josh Lake did not expect his life to fall apart, and he definitely did not see himself returning to his hometown. But when his car breaks down, he has no choice to but to try to make the best of his circumstances. Will they come to realize that they might be better together?

First of all, Angela Ruth Strong is hilarious. There are so many great one-liners in this book. She has a way of weaving humor into everyday situations where it fits in naturally with the dialogue.

Adding to the humor are the elderly characters, Dot and Annabel. They might be a bit nosy, but they certainly liven up the scenes. But they also have great insights into life.

What else I love is the fact that connections are made between the name of the ranch (Bright Star) and the Bible. This story is set at Christmas. That plays a part in it with the Magi especially. But other Bible stories are also connected to stars in the Bible.

I love that this series continues with the other brothers who do play cameo roles in the story. You can read this as a stand-alone. But as always, I think it is more fun when you connect with the characters in other books.

Josh and Paisley have been friends since high school, so their relationship starts at a comfortable level. Well, mostly – they tend to give each other a hard time. Kissing is an interesting topic in this book, but you will have to read it to find out why. The pacing of their romance is just right. And now, I am not spoiling anything since it is rather apparent that this is a romance.

What is really fun is this book has been recently made into a movie. After seeing the trailer, I definitely want to see it! Watching a clean movie with plenty of sparks is definitely enjoyable.

I read this book several years ago in 2019. Then I reviewed the whole series at once. This is my separate review of this book. I do own it.